The week of July 8 was spent in the warm and embracing care of the 5th floor Oncology staff of Sibley Memorial Hospital, Washington, DC. There was a great deal of cocktails they prepared for me to get the serious part of the chemotherapy treatment underway. Early Monday we reported to the hospital, checked into a room design type I am quite familiar with my past in hospital design/construction. The room was a true isolation room. There was an anteroom, additional hand washing stations, and the air control system that can be adjusted to have all air flow out of the room, positive pressure rooms, or have all the air flow into the room, negative pressure rooms. My concern was that this was for me if I became neutropenic, or severely suppressed auto-immune system. They quickly allayed my fears, explaining the room  just happened to be open and clean when I walked in…whew.

As I have bored you with before, the key to good chemo is lots & lots of pee. The urine system is the method the body uses to void itself of the dead cells created by the chemo effects. Chemo kills fast growing cells, hair follicles, skin cells, gum & mouth tissue, and of course the pièce de résistance…fucking cancer cells. In order to get the urine system warmed up and ready to go the distance, they set me up with a cute little pump/solution setup with lots of 5% saline, and other flowmax type medicines. I thought, this is not so bad, I will miss the first week of the Tour de France, but no biggie. Bring it on bitches!!!

What I wasn’t aware of, this was like pushing the scrum sled around the practice pitch with no other players standing on the weight side, no cinder or concrete blocks on the imaginary opposing scrum side, basically, no more resistance than pushing a lawnmower. The oncology pharmacists in the bowels of the hospital had much more going on than I realized. When I first came in the staff took blood, urine, & weighed me. That data was being used to calculate the firepower the oncologists & pharmacists would bring to bear. We had no idea what was coming…but coming it was.

I need to preface this reveal of firepower with a story, when the Butcher of Uganda, Idi Amin, snatched hostages in 1976, they claimed the Israeli Special Forces went in to rescue, not true, Fake News. When soccer fans overran the trains, riots shook the entirety of the British Isles. When the Queen was asked to restore calm, she knew whom to call, she called the guys that had come to help me beat cancer. In order to compare them to Seal Team 6, they would have to be called Seal Team 87. These are the guys you want in your scrum to fight cancer. When they rolled this pump & chemo solutions into the room, named Graham, Bobby, & Charlie, I knew the our saviors had arrived, Peggy & I wept. A heroic, deep, dark, part of the history of Welsh Rugby…none other than the

Had come to help us. This is a mythical group of Welsh Rugby front row players best romanticized by Max Boyce, and forever memorialized on YouTube. 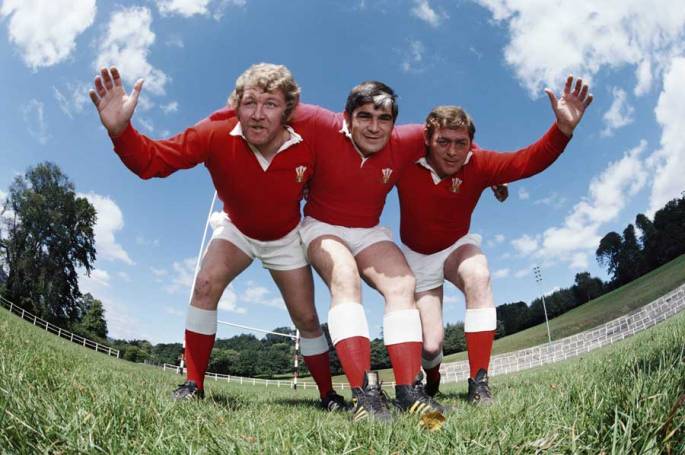 Friday, after 72 hours of continuous chemo drip from the Pontypool Front Row, they let me go home, 4 nights and 5 days of getting worked over by my heroes. I was wiped out…sore, exhausted, nauseous, thirsty, remarkably similar to that feeling after a great rugby game and even greater rugby party. (Have I mentioned my greatest claim of fame in rugby…”while I did not win every game I played, I NEVER lost a party.”)

The week after an intense in-patient chemo session should not be wished upon anyone. Weakness, dizziness, shortness of breath, anemia, headaches, insomnia, nausea, are the symptoms that I can recall, in the fog I know there were many others, they just don’t come to mind. Think of the worst intestinal and respiratory influenza you have ever had, and raise it to an exponent of 3, not 3 times, to the power of 3!!! We talking some sick shit-ness friends & fans.

The good news, ahem, is that there are 3 more sessions in my future. There is a limit to the amount of the “Red Death”, or doxorubicin I can tolerate. Doxorubicin is a type of chemotherapy drug called an anthracycline. It slows or stops the growth of cancer cells by blocking an enzyme called topo-isomerase 2. Cancer cells need this enzyme to divide and grow. There are other toxic poisons in the cocktail that enters the Port-a-Cath blood stream access point under my right clavicle. The overall chemo regime I have started is called MAI. Don’t ask me to explain all the ingredients of this cocktail, as most of you know, I haven’t had a cocktail to the date of this blog authorship…in 24 years, 7 months, 26 days, (but who’s counting),…(9004 days if anyone is asking Larry & Sergei).

Long story short, the 4 MAI chemo sessions I am planned for, (with one down) are my best shot at seeing the new year…I didn’t say WHICH new year, now did I? It’s not that I will croak at the end of the 4th session, but the chances of me surviving go down dramatically with no positive results at the end of the 4 because I can take only so much of a lifetime amount of the MAI Chemo Regime.

Herein lie clues as to why I don’t post more cleverly written, borderline funny blog entries, with the finality of it all drilling deeper & deeper into my soul, it is getting harder and harder to be clever & funny. To be perfectly honest, if I can’t author clever, tongue in cheek humor, what the fuck is the point.

I love you all, thank’s for reading my shit.

This site uses Akismet to reduce spam. Learn how your comment data is processed.